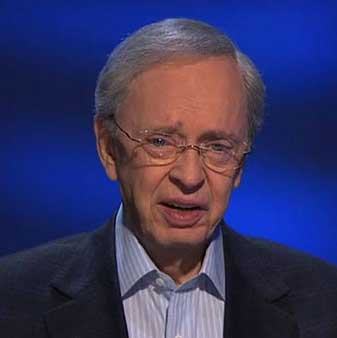 Charles Frazier Stanley was born on September 25, 1932 and is the senior “pastor” of First Baptist Church of Atlanta (FBCA) and founder of In Touch Ministries. In the mid 1980s, Stanley also served two terms as president of the Southern Baptist Convention. In 2000, following several separations and attempts at reconciliation, Charles Stanley and his wife, Anna J. Stanley, were “divorced” after 44 years of marriage.

The overwhelming majority of Protestants believe that the Bible teaches that people are justified (put into a state in which they will be saved) by faith alone in Jesus – i.e., apart from a consideration of their actions, deeds or sins. Most of them also believe in “once saved always saved” or eternal security: that a man who believes in Jesus cannot lose his eternal salvation. These ideas are false and completely contrary to the teaching of the Bible.

Charles Stanley (Eternal Security, page 70): “The debate is over whether or not a man can be on his way to heaven one minute and on his way to hell the next. To answer that question, we must understand exactly what sends a person to hell. As we have seen, sin alone is not enough. . . . It takes more than simply sinning to get to hell. . . . It is not lying, cheating, stealing, raping, murdering, or being unfaithful that sends people to hell. It is rejecting Christ, refusing to put their trust in Him for the forgiveness of sin”.

Pretty outrageous, isn't it? No wonder the world are full up of people with no intention of Obeying God or KEEPING His Commandments.

He is in DIRECT Contradiction to Bible Truth. Paul himself said many times, "Let NO ONE DECEIVE YOU! The wicked will not inherit the Kingdom of God." But that isn't enough for most people. They would rather put their trust in a 'Wolf' and be lead by the hand down the road to perdition.

In Matthew chapter 5, we find the parable about cutting off one’s hand or eye to avoid Hell.

This parable, which obviously refers to cutting off occasions of sins – things in life that will drag people into offenses against God – only has a meaning if sins and works are a part of determining whether one attains salvation. By cutting off sinful things and bad works, one will save his soul. Man’s sins and works are therefore a part of his justification. If man were justified by faith alone, this parable would not make any sense whatsoever.

The Truth is NOT difficult to understand....here are just a few passages that refute the statement above and expose this Wolf for what he is....

"For of this you can be sure: No immoral, impure or greedy person -- such a man is an idolater -- has any inheritance in the kingdom of Christ and of God. Let no one deceive you with empty words, for because of such things God's wrath comes on those who are disobedient. Therefore, do not be partners with them" (Eph. 5:5-7).

"But the cowardly, the unbelieving, the vile, the murderers, the sexually immoral, those that practice magic arts, the idolaters and all liars - their place will be in the fiery lake of burning sulfur. This is the second death" (Rev. 21:8).

Charles Stanley says an Apostate can be Saved!

Charles Stanley (Eternal Security, page 93): “Even if a believer for all practical purposes becomes an unbeliever, his salvation is not in jeopardy. Believers who lose or abandon their faith will retain their salvation. A Christian who at no point in his entire life bore any eternal fruit would remain secure in Christ!”

This statement is a direct word for word denial of the Bible:

Acts 4:12 “… the name of Our Lord Jesus Christ… Nor is there salvation in any other. For there is no other name, under heaven, given to men, whereby we must be saved.”

YOU MUST PERSEVERE TO THE END TO BE SAVED!

Matthew 10:22 “And ye shall be hated of all men for my name’s sake: but he that endureth to the end shall be saved.”

This totally contradicts the Protestant view of “once saved always saved.” Also see Mark 13:13 for the same message.

NOTHING in Scripture could be more clear than the Absolute necessity of CONTINUING in the Faith and ENDURING to the end! But these wolves would have you believe that a 'moment' of faith placed in the finished Work of Christ at any given juncture of your life is all you need to secure your eternal inheritance. Live like the devil, in abject unbelief, without worry, just put your trust in the 'preacher/teacher' and all will be well. Wake up before it's too late!

"eternal life to those who by Steadfast Endurance in doing good seek for glory, honor and immortality, but to those who are self-seeking and do not obey the truth but obey unrighteousness, indignation and wrath." Rom 2:7

"My mother and brothers are those who hear the Word of God and KEEP it!" Luke 8:21

"More blessed are those who hear the Word of God and KEEP it!" Luke11:28

"You are My friends IF you DO whatever I command you." John15:14

"Do you see that faith was working together with his works and by WORKS faith was made perfect!" James2:22

"But do you want to know, O foolish man that faith WITHOUT Works is dead!" James2:20

"And whatever we ask we receive from Him, because we KEEP His Commandments and DO those things that are pleasing in His sight." 1John3:22

BELIEVERS CAN FALL AWAY – PERIOD!

Hebrews 6:4-6 “For it is impossible for those who were once enlightened, and have tasted of the heavenly gift, and were made partakers of the Holy Ghost, and have tasted the good word of God, and the powers of the world to come, if they shall fall away, to renew them again unto repentance; seeing they crucify to themselves the Son of God afresh, and put him to an open shame.”

This passage clearly shows that people who are believers, who “were partakers of the Holy Ghost,” can fall away from the state of justification. The reference to it being “impossible” for such people to be renewed again to that state refers to the original grace of baptism, by which they were first cleansed from sin. They cannot be baptized again, but even grave sins can be forgiven in confession (John 20:23). This passage obliterates – totally demolishes – the once saved always saved Protestant theology.

The above section on Faith Alone and Eternal Security Refuted was only a small excerpt from the entire article. Please visit the following link to read much more about various topics that Protestant misinterpret.

The Bible Proves the Teachings of the Catholic Church