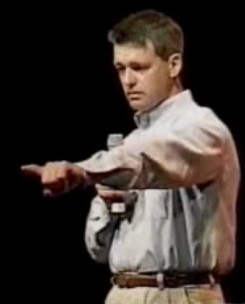 Paul David Washer (born 1961) is the Founder, Director and Missions Coordinator of "HeartCry Missionary Society" which supports indigenous missionary work. He is also a Southern Baptist itinerant preacher. Washer's sermons tend to have an evangelistic focus on the gospel and the doctrine of the assurance of salvation, and he frequently speaks against practices such as the sinner's prayer, and a focus on numerical church growth.

Paul Washer is a False Teacher

I was, for several years, a huge fan and follower/disciple of Paul Washer. I thought he was a godly leader: a real missionary, and a true "reformer." I had several of his sermons on tape and, in fact, made copies of his tapes and distributed them to my fellow college students who needed to hear the "true Gospel of God's grace." I met him and spoke with him on theology several times. However, I was on a Path that Paul Washer was not on.

As I researched biblical theology and Church History more in depth, and in particular, the formation of the biblical canon, I came to reject common Protestant notions, such as sola scriptura. The simple reason for this is that it was unheard of until the time of the Reformation. Prior to Luther and Calvin, the doctrines of sola fide and sola scriptura were non-existent. There is a complete blackout of Protestant theology for 1,500 years of the Church. Apparently, the Holy Spirit forgot the Church. But that brings me to an interesting point in regards to Paul Washer…

The last time I spoke to Paul Washer, he had me thrown out of a Baptist Church by his followers because I asked him privately where the Church was for the first 1,500 years. Paul told me explicitly, 3 times, as he yelled in my face, "It was a complete blackout, Jay, a complete blackout–a blackout!" So Paul Washer was quite flippant and open about his Anabaptistic view–that the Church had been forsaken, and that the Anabaptists had restored it... So, apparently, we have a restored Church by heretics, at some unknown time... But who is truly the Church? It can't be those nasty Catholics–even though in 2001 Paul Washer was quoting a Catholic Bishop in his sermons (St. Augustine, Bishop of Hippo)! …

Consider what he says at the beginning of his sermon: if he is a false [teacher], he should be avoided. He is a false [teacher]. He does not teach the doctrines of the Catholic Church nor the Ecumenical Councils. In fact, he abhors the Church and her definitions and serves and aggrandizes himself.