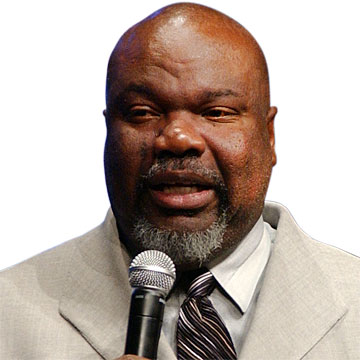 Thomas Dexter (TD Jakes) was born on June 9, 1957 in South Charleston, West Virginia to Ernest Jakes, Sr., a janitor and entrepreneur, and Odith, an educator. By 1990, his church had moved twice, first from Montgomery to the nearby community of Smithers, and from there to his hometown of South Charleston. In 1993, the church moved yet again within the Charleston area, to Cross Lanes. Both Jakes and his Potter’s House church are unrelated to the Potter’s House 'Christian' Fellowship, a Pentecostal denomination founded in Arizona in 1970.

Denial of the Trinity

Jakes in the past adopted an incorrect view of the nature of God. At the Potter House’s website, under their statement of faith regarding God, they state, “There is one God, Creator of all things, infinitely perfect, and eternally existing in three manifestations: Father, Son and Holy Spirit.”

The keywords here are “three manifestations.” If Jakes believed in the Trinity he should use words like “simultaneous,” “coeternal,” or “coequal” when referring to the Father, Son, and Holy Spirit’s relationship to one another. T.D. Jakes’s view on the nature of God was earlier known as modalism (a 3rd-century teaching accredited to Sabellius). Modalism is a heresy that teaches the Father, Son, and Holy Spirit do not simultaneously exist as distinct persons (see Modalism). Rather, God at some times and places is the Father, at some times the Son, and other times the Holy Spirit.

Jakes says he holds now the Orthodox belief of the Trinity but still uses vaguely the word “manifestations” on his site.

The Catholic Church and Faith is the only Christianity that begun at the year of 33 AD and is the only original and visible Church from the time of Christ. The Catholic Church made the Bible and spread Christianity all over the world, and according to protestants, Christ used a false church to spread his words all over the world for 1500 years? This, obviously, is ridiculous to any good willed person, but since this world has few of these people, more evidence is needed.

“I am afraid that this is a hard nut for Protestants to crack, namely – That though we admit that the separate works composing the New Testament were now in existence, yet they were for centuries not to be found altogether in one volume, were not obtainable by multitudes of Christians, and even were altogether unknown to many in different parts of the world.” (Where We Got the Bible, p. 29)

Sometimes the people who seems to be the Catholic Church administration, that is, the people that seems to hold positions of power in the Catholic Church, (but actually do not since they are heretics) can be corrupt as in the case of the Arian heresy in the 4th century when about 98% of the Episcopal chairs, that is, Bishop’s sees, were overtaken by Arians, and the little flock of true Catholics who did not apostatize from the Catholic faith were grievously persecuted for their faith. Even now many are in heresy but still call themselves Catholic. However, the Catholic Faith is right, and these people’s apostasy or heresy does not effect the Catholic Church. Just because some people call themselves Catholic do not make them Catholics. In this sad instance of human history, there are now approximately 20 000 Protestant sects which all contradict each other on crucial doctrinal points. This proves to any good willed person that at least 19 999 sects must be wrong if we follow simple logic. Protestantism was unheard of even to the founders of it since they all started as Catholics but then apostatized. True Christianity started at 33 AD, not in the 16th Century or later.

It is a fact of history, scripture and tradition that Our Lord Jesus Christ founded His universal

Matthew 16:18-19- “And I say to thee: That thou art Peter: and upon this rock I will build my Church, and the gates of hell shall not prevail against it. And I will give to thee the keys of the kingdom of heaven. And whatsoever thou shalt bind upon earth, it shall be bound also in heaven: and whatsoever thou shalt loose upon earth, it shall be loosed also in heaven.”

Our Lord made St. Peter the first Pope, entrusted to him His entire flock, and gave him supreme authority in the universal Church of Christ.

Papal Infallibility does not mean that a pope cannot err at all and it does not mean that a pope cannot lose his soul and be damned in Hell for grave sin. It means that the successors of St. Peter (the popes of the Catholic Church) cannot err when authoritatively teaching on a point of Faith or morals to be held by the entire Church of Christ. We find the promise of the unfailing faith for St. Peter and his successors referred to by Christ in Luke 22.

Luke 22:31-32- “And the Lord said: Simon, Simon, behold Satan hath desired to have all of you, that he may sift you as wheat: But I have prayed for thee, that thy faith fail not: and thou, being once converted, confirm thy brethren.”

Satan desired to sift all the Apostles (plural) like wheat, but Jesus prayed for Simon Peter (singular), that his faith fail not. Jesus is saying that St. Peter and his successors (the popes of the Catholic Church) have an unfailing faith when authoritatively teaching a point of faith or morals to be held by the entire Church of Christ.

Luke 10:16- “He that heareth you, heareth me: and he that despiseth you despiseth me…”

Matthew 18:17 -“And if he will not hear the church, let him be to thee as the heathen and publican.”

Pope Leo XIII, Satis Cognitum, 1896: “…Christ instituted a living, authoritative and permanent Magisterium… If it could in any way be false, an evident contradiction follows; for then God Himself would be the author of error in man.”

The early Church fathers, the prominent early Christian writers of the first centuries, recognized that Peter is the rock. There are many citations one could bring forward, but here are just a few.

St. Cyril of Alexandria (370-444), who played a key role with the Council of Ephesus, stated in his Commentary on John: “He [Jesus] suffers him to be no longer called Simon… He changed his name into Peter, from the word petra (rock); for on him He was afterwards to found His Church.”

St. Basil the Great (330-379 A.D.), Against Eunomians, 4: “Peter… who on account of the pre-eminence of his faith received upon himself the building of the Church.”

St. Gregory Nazienzen, great Eastern father (329-389 A.D.), Oration 26: “… of all the disciples of Christ, all of whom were great and deserving of the choice, one is called rock and entrusted with the foundations of the Church…”

St. John Chrysostom, great Eastern father and Bishop of Constantinople, Homily 3, De. Poenit. 4, 387 A.D. “Peter himself the head or crown of the Apostles… when I name Peter I name that unbroken rock, that firm foundation…”

One could also quote St. Ambrose, Jerome and many others, but the point should be clear.

Learn more: The Bible teaches that Jesus made St. Peter the first Pope; The Bible Proves the Teachings of the Catholic Church